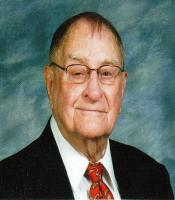 William "Bill" Hunter Spencer passed away September 30, 2013 at his home with family by his side. Bill was born January 2, 1921 to T.H. Spencer and Gladys Blanchette Spencer in Havana, Cuba. He moved to Houston as a young child, where he grew up in The Heights. Bill graduated from Reagan High School and attended The University of Texas until he volunteered for service in the U.S. Army. After OCS he became a 1st Lieutenant in the Corps of Engineers and served our country from 1943 to 1946. After returning from the war, he resumed school and received a Petroleum Engineering Degree from the University of Houston. He then married Vera, his wife of almost sixty years and whom he lovingly called "V." Bill enjoyed family vacations, golf at Tennwood, sports, the Olympics, he had a wonderful sense of humor in everything he did, he made eating an "event," and he enjoyed taking family and friends out for a fine meal and never wanted anyone to go hungry. He worked a crossword puzzle every day and even at the age of 92, went to the YMCA five days a week. He loved his church family and especially enjoyed going to the United Methodist Men's Breakfast every Wednesday morning. He is preceded in death by his parents and wife Vera Tissue Spencer. He is survived by his brother Tom Spencer and wife Alice of Houston, TX. He is also survived by his three children, Ann McClanahan and husband Mark of Beaumont, TX, Charles Spencer and wife Becki of Las Vegas, NV, John Spencer and wife Kathy of Houston, TX. Also, his grandchildren Lindsay Fazand, husband Chad and great granddaughter Lauren of Tyler, TX, Rachel Montoya and husband Danny of Stamford, CT, Amanda Hatch, husband Nick and great granddaughter Maddison of Appleton, WI, Austin Spencer and fiancée Paige Overton of Las Vegas, NV, and Courtney Radcliffe and husband Eric of Las Vegas, NV. A graveside service will be held at Memorial Oaks Cemetery in Houston, TX on Thursday, October 3, 2013 at 10:00 a.m. Immediately following, all are invited to greet the family during a reception at Fair Haven United Methodist Church - 1330 Gessner Drive Houston, TX 77055. In lieu of flowers, please make a memorial donation to the John H. Reagan WWII Memorial Association - P.O. Box 801373 Houston, TX 77280-9944.

The services for William have not yet been added. Please sign up below to be notified when the services are ready.

The attached photos are added to the memorial of William 'Bill' Spencer to help share their legacy.

Thank you for sharing your memory of William