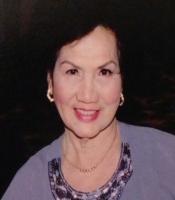 Venus Roldan Ramos was called home to heaven by her Lord and Savior, Jesus Christ after a battle with bile duct/liver cancer. She passed away peacefully at her home surrounded by her family on September 5, 2013. "Megastar" as she's lovingly called by many, was born in Manila, Philippines on September 20, 1927 to Felipe and Mercedes Sabado Roldan. She is preceded in death by her husband, Dr. Jesus A. Ramos Sr. and her oldest son, Reynaldo "Boy" Ramos. Venus migrated to the United States in 1978. She lived for a few years in Guam and eventually settled in Carrollton, Texas. She dedicated herself exclusively to raising and nurturing her family. She enjoyed cooking, singing, dancing and occasionally made her way to her favorite slot machines. Venus is survived by her children, son Manuel "Toti" Ramos, daughter Wanda Hicks and husband, Jim Hicks, son Robert Ramos and wife, Minda Ramos, daughter Tanya Ramos, son Jesus Ramos Jr. and wife, Nerisa Joson, daughter Jennifer Smith and husband, Randy Smith, and daughter Nancy Ramos, (24) grandchildren, 4 of whom are living in the United States - Michelle Pineda, Kristina Pineda, Mallori Ann Alabastro and Sharla Ramos, and 20 reside in the Philippines; (27) great-grandchildren from the Philippines, her sister, Estrella Pelea, and brothers, David Roldan, Returno Roldan, Rustico Roldan aka Carlos Salazar, and Roger Roldan, all residing in the Philippines. The family will receive visitors on Sunday, September 8, 2013 and on Monday, September 9, 2013 from 6:00 - 8:00 pm at Distinctive Life Funeral Homes, 1611 No. Central Expressway Plano, Texas 75075. Memorial Services will be held at 1:00 p.m. Tuesday, September 10, 2013 at Faith Chapel, Prestonwood Baptist Church at 6801 W. Park Blvd, Plano, TX 75093.

The services for Venus have not yet been added. Please sign up below to be notified when the services are ready.

The attached photos are added to the memorial of Venus ramos to help share their legacy.

Please help memorize Venus ramos by recording your attendance below.

Thank you for sharing your memory of Venus