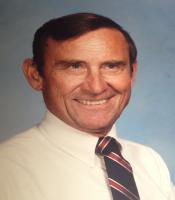 Raymond (Ray) P. Harris, Sr., 82, of Richardson, died Saturday, August 31, 2013, of natural causes. He was born in Mayking, Kentucky, on May 10, 1931, to the late Spence Edward Harris and Sadie Elizabeth Holbrook Harris. Voted Most Likely to Succeed by the Whitesburg High School Senior class of 1950, Mr. Harris emphasized the importance of education throughout his life. He graduated from the University of Kentucky in 1955 with a Bachelor of Science in Electrical Engineering and became a licensed Professional Engineer. He completed advanced coursework in engineering at the University of Virginia in Charlottesville, Virginia. As an electrical engineer, he worked for Sperry Gyroscope in Great Neck, New York; Sperry Marine Division in Charlottesville, Virginia; The Magnavox Company in Fort Wayne, Indiana; and Texas Instruments in Dallas, Texas. His work emphasized circuit design, including designs on NASA's Voyager. He retired from TI in 1991. He was a member of the Christian Church (Disciples of Christ) and worshipped at the First Christian Church of Richardson, Texas. As a parent, Mr. Harris believed "children are stars in one's heavenly crown" and was proud of his four children and two grandchildren. He led by example. Though he was a victim of a hit and run driver in 1982 and persevered through incredible challenges, he still enjoyed an active and fulfilling life with his loved ones. He was a distinguished member of the PTA for 27 years and coached his children's sports teams. He enjoyed horseback riding, working on cars, square dancing, camping, inventing, bridge, chess, and visiting with family and friends. He is survived by: his children, Diane (James Pierce), Paula (Paul Allred), Ray (Deborah Harris), Rebecca (Aaron Burkes); two grandsons, Nathan Burkes and Nicholas Burkes; his brother, Tommy (Edith Harris) of Richmond, KY; his sister, Jean Bible of Detroit, MI; sisters-in-law, Patricia Harris of Tollesboro, KY and Noreen Harris of Michigan and many beloved nieces and nephews. Mr. Harris was preceded in death by his parents; brother, Spence Harris; sister, Opal Sanders and her husband Ed; sister-in-law, Faye Harris; brother, Steve Harris; and brother-in-law, Jack Bible. A celebration of Mr. Harris's life will be held at the United Disciples Christian Church on Saturday, September 14, 2013 at 2 p.m. with Reverend Joe Harker officiating. In lieu of flowers, memorials may be made to the United Disciples Christian Church (Disciples of Christ), 601 E Main St, Richardson, TX 75081. Arrangements are under the care and direction of Sam Scott at Distinctive Life Funeral Home, Plano, TX. Psalm 116:15 Precious in the sight of the LORD is the death of His saints. To express condolences or share a memory, please write below.

The services for Raymond have not yet been added. Please sign up below to be notified when the services are ready.

The attached photos are added to the memorial of Raymond Harris, Harris, to help share their legacy.

Thank you for sharing your memory of Raymond