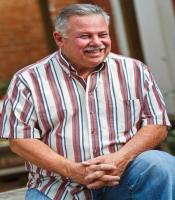 On the morning of August 16, 2013, John A. Starne crossed from Dallas TX into heaven on the arm of Jesus. During the process of a fatal heart attack, the doctors resuscitated him long enough for him to tell that he had just been with Jesus! The pull of the Lord was stronger than the efforts of the doctor's, and John left this earth to rejoice in glory. Till the very end, John was telling others about the glory of our Savior. John was 66 years old. John Aaron Starne was born in the town of Independence in Montgomery County, Kansas, Sept. 14, 1946. He was the second child, and the first son, of Katherine Bellmont Hayes and John Marrion Starne. John spent his entire childhood and teenage years in the southeastern Kansas area where he enjoyed the usual delights of rural life such as fishing, baseball, and hard work. John graduated from Arcadia High School in 1964 and lived in Kansas City for a short time before he went to Southern California where he quickly became a master machinist and developed a love for the trucking and freight brokerage industry. His early adult years took him back and forth from Southern California to SE Kansas/SW Missouri as he pursued the American dream. John met Leann Hillegas in 1986 and they soon began an adventurous live together. As a team in the Motorcoach Tour business, as driver and tour escort, they traveled the country together for several years, seeing all the sights and serving people. They were married on May 9, 1989 and soon after, their son Nickolas Aaron was born. The traveling together slowed as they started their family. John returned to the trucking industry, driving, dispatching, brokering and owning fleets. In 2002, John brought his family to Dallas, TX to direct the transportation department of Knox Oil. Not long after, the Holy Spirit grabbed ahold of the entire Starne family and they began to serve Jesus with all their heart, John leading the way. At the Lord's direction, on Christmas day of 2004, they took all their Christmas funds and prepared a holiday meal for the homeless. Their hearts were hooked and this simple act of obedience launched The Lord's Hands & Hearts Ministries that became the legacy of John Starne. He was called to the homeless, addicted, overlooked, and outcast section of society. He loved them unconditionally. Both John and Leann were ordained and licensed in the fall of 2008. The Lord has blessed the ministry to include a large weekly homeless outreach called Solomon's Porch, offering meals, clothing, bible study, neighborhood evangelism, neighborhood clean-up, with lots love and listening ears. Because of the way he loved the people, the Lord opened the door for John to plant Mercy Seat Church for his disciples on the street, then Nehemiah House transitional housing, Pauline's Pantry food pantry and Urban Relics Resale. Besides serving Jesus, John loved Corvettes, flying airplanes, fishing, traveling, rat rods, being at the lake and being with his family. John is lovingly remembered by his wife of 24 years, Leann of the home, his son Nickolas Aaron Starne of Dallas, TX, his daughter Tamara Marie Byler, grandsons Ryan Jacob Starne and Matthew Dane Byler, great grandsons Hayden Lee Starne and Kamryn Jacob Starne, of Baxter Springs, KS. His mother Katherine Campbell and stepfather Beecher Campbell of Oswego, KS, his aunt Naomi Gorman of Independence, KS, his brother Paul Eugene Starne and wife Diane of Joplin, MO, and other loving nieces, nephews and relatives. He was preceded in death by his father, John Marrion and his sister Ruth Mae Hunt. Two Memorial services are being held: The first on August 24 at 1pm, at Cornerstone Baptist Church, 1819 Martin Luther King Jr. Blvd, Dallas, TX 75215. The second is on August 31 at 2pm at 1st Assembly of God, 2414 N. 8th St., Independence, KS 67301. In lieu of flowers, memorial donations may be made to the Pastor John Memorial Fund to help cover funeral costs and continue the work John started. Mail donations to 3927 Main St., Dallas, TX 75226 or donate online at www.handshearts.org. The family wishes to thank Cornerstone Baptist Church Dallas, 1st Assembly of God Independence, our wonderful family and the body of Christ for their prayers and support.

The services for Pastor have not yet been added. Please sign up below to be notified when the services are ready.

The attached photos are added to the memorial of Pastor John Starne to help share their legacy.

Thank you for sharing your memory of Pastor