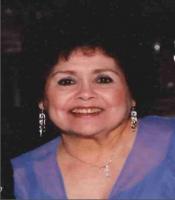 Lucilla Renteria Starman, 73, died in Houston, Texas on Tuesday, the 23rd of July, 2013, after a brave two year battle with cancer. Her beloved children Erik and Melanie were at her side. Lucy was born July 4, 1940 in Yuma, Arizona. Her career began at the Yuma Proving Ground, a test facility for the U.S. Army, where she would eventually meet her future husband, Robert Gerhard Starman. After marrying and moving to Arlington, Virginia, Lucy briefly worked at the Pentagon. Soon after, she began her life-long journey as a devoted mother with the birth of her son, Erik. The family then moved to Las Cruces, New Mexico where their daughter Melanie would later be born. Las Cruces would be home to Lucy for 43 years. Lucy believed there was no more important role for her in life than that of a dedicated wife and mother that would always be there for her husband and children. She overcame great adversity in her childhood and prided herself on being a very independent and strong woman. She had a great love for ballet, a broad knowledge of sports, and a love/hate relationship with politics. Lucy was a loyal friend and loved talking to people and learning about their lives. She was spirited and young at heart. She always believed in looking her best and carried herself with grace. Lucy's greatest pride and joy was always her children, and eventually her grandchildren, Annalise and Colton Bash, who gave her an abundance of joy and laughter while she was fighting cancer. Lucy is survived by her son, Erik G. Starman of Lancaster, California; her daughter Melanie Starman Bash and her husband James of Houston, Texas and their children, Annalise Bash and Colton Bash; by her sister Jane Richwine of Tucson, Arizona and her children and families; by her sister Dolores O'Neal of Spicewood, Texas and her children and families; by her brother Cruz Renteria of Yuma, Arizona; and by her brother Alex Renteria of Yuma, Arizona. Lucy is predeceased by her loving husband of 41 years, Robert Gerhard Starman; by her parents Juan and Julia Renteria; by her brother Mickey Renteria; by her sister Victoria Neighbors; and by her sister Helen Flory. Lucy's family wishes to thank M.D. Anderson Cancer Center, Houston Hospice, and Clarewood House for their wonderful care and support throughout her illness. A funeral mass will be held at 10:30 in the morning on Monday, July 29th, 2013, in the Chapel at St. John Vianney Catholic Church, 625 Nottingham Oaks Trail in Houston.

The services for Lucilla have not yet been added. Please sign up below to be notified when the services are ready.

The attached photos are added to the memorial of Lucilla Starman to help share their legacy.

Please help memorize Lucilla Starman by recording your attendance below.

Thank you for sharing your memory of Lucilla