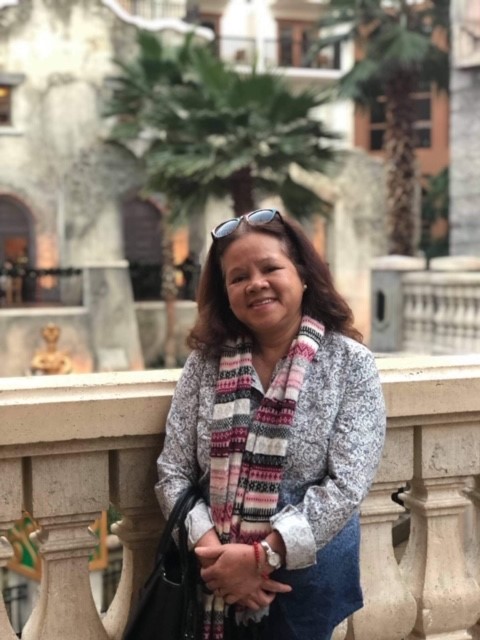 Wilhaida "Haida" Mondano Elsisura left this life to be with the Lord on January 4, 2020, surrounded by loved ones. She was born on August 15, 1955 in Mainit, Surigao del Norte, Philippines. She is the 2nd daughter of the late Meliton Mondano Sr. and Purificasion Moleta Mondano. She grew up in Mainit and was very close with her 6 siblings - Ofelia, Loida, Zoraida, Alda, Meliton (Doodz) and Medel (Boboy). She went to college at Southwestern University in Cebu City and graduated with a Bachelor's Degree in Nursing. She went back to Surigao City and worked as a school nurse at Surigao Del Norte School of Arts and Trades (now Surigao State University). Her husband, Fidel L Elsisura, Jr. was also working as a College Electrical Instructor at the same school. They had already known each other as classmates in their hometown. They were married in January and February (civil and church) of 1980.She is survived by her husband Fidel Jr., sons Nimrod Wilford with wife Irish; Mielton Gregor with wife Richie; daughters Kaori Casey with fiancé Pascual, Zoya Margaret with Gerardo; Zylene Almira; grandchildren Eckhart, Gabby, Sophia and Zack; her sisters Mana Ofelia and husband Erich; Loida and husband Kevin; Zoraida and husband David; Alda and husband Leo; Dodong and wife Joy; Boboy, her in-laws Bebiana, Flora, Gloria, Elena and Fidelino; numerous nieces, nephews, cousins and friends. All of these she loved and touched deeply.She was a dedicated and loving mother first and foremost. She was mostly a stay at home mom when her children were growing up but she also had many roles as a registered nurse - a school nurse, a community nurse, hospital nurse and a clinical instructor but most of all she was the nurse for her mother Casion and her family. She was their own Florence Nightingale.She came here in the US to work as an RN in 2004 to Chicago, IL. After her contract ended she moved to Carrollton, TX to be closer to her sister Loida. She petitioned for her family and in 2009 her husband and 3 daughters came to be with her.She had the biggest heart, the most loving and caring soul. She loved cooking, gardening, decorating and arts and crafts. She was so creative, she could turn any dull object into something beautiful. She was also a strong woman, called by her siblings "small but terrible". She worked hard to recover and fought her condition until the very end.She will be dearly missed and forever alive in our hearts and minds.

The family would like to say thank you and express their deepest appreciation for all her family, relatives, friends, co-workers and everyone whose lives she had touched, for the continued prayers and all kinds of support.

The family thanks everyone who were able to come to her viewing in Dallas, TX.

The family also wants to express their gratitude for those who have organized and are praying for her at her novena prayers in Mainit, Surigao del Norte.

Her burial services will be at her hometown in Mainit Cemetery, more details will be posted on Facebook after the process of bringing her home is finalized.

The attached photos are added to the memorial of Wilhaida Mondano Elsisura to help share their legacy.

Thank you for sharing your memory of Wilhaida